Here is a news spot about the OK quake swarm.

Magnitude 4.0 earthquake hits central Oklahoma, follows six other quakes Friday
A magnitude 4.0 earthquake shook central Oklahoma shortly after 10 p.m. Friday, the U.S. Geological Survey reported. The quake followed two other earthquakes — a 2.8 and a 2.6 magnitude — that were centered near Langston just minutes earlier and four other earthquakes ranging from 2.7 to 2.9 magnitude near Guthrie, Yale and Crescent on Friday afternoon and evening, the Geological Survey reported. That makes seven earthquakes of magnitude 2.6 or greater recorded in the state on Friday. 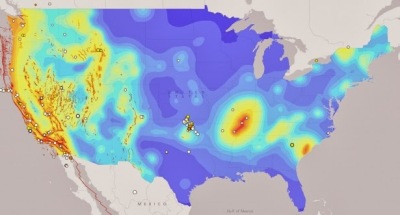 In this map of earthquakes recorded by the US Geological Survey in the past thirty days (each quake is marked by a dot on the map), Oklahoma is a clear hot spot. (USGS)– (source)

This article states, “[T]here have been more than 500 earthquakes in Oklahoma this year and 150 last week. (As of 2/19/14) … No one is disputing that such a dramatic spike is unusual. The question is why it’s happening now, and science suggests that the fracking boom may be, at least in part, to blame. Researchers say the toxic wastewater, stored thousands of feet underground, reducing friction along fault lines, which can trigger earthquakes.”

Or does it? This scientist said six months ago of the connection between hydraulic fracturing (fracking) and earthquakes in OK:

Seismologist: Fracking doesn’t cause earthquakes
“Frohlich cited six earthquakes since 2008 in Texas, Arkansas, Colorado, Ohio and Oklahoma, ranging from magnitude 3.3 to magnitude 5.7. Their locations show that human-caused earthquakes are geographically widespread and geologically diverse, but “very rare,” given the amount of petroleum produced and the amount of waste being disposed of. Why some injection wells cause earthquakes and others don’t remains unclear, he said. Frohlich hypothesizes that quakes occur when a “suitably oriented” fault lies near an injection site.”

“Texas has 10,000 injection wells, Frohlich said, and some have been in use since the 1930s. That effectively makes the state a giant research lab for the shale-gas drilling issues now facing Appalachian states including West Virginia, Pennsylvania, Ohio and New York. If injection wells were “hugely dangerous,” he said, “we would know.” “Texas would be famous as a state that just rocks with major earthquakes,” Frohlich said. “That is not true.“”

Scientists will debate this and that. Whether all the quakes in Oklahoma are from fracking or not isn’t the issue. The issue is where can we find truth? The bible has it. We are told that in the last days there will be earthquakes in diverse places, and we are in the last days. We have been in the end times since Jesus ascended. (Hebrews 1:2).

“For nation will rise against nation, and kingdom against kingdom. There will be earthquakes in various places; there will be famines. These are but the beginning of the birth pains.” (Mark 13:8)
~~~~~~~~~~~~~~~~~~

Have any aspects of end-times prophecy been fulfilled?

Why Every Calvinist Should be a Pre-Millennialist

Eschatology Charts: If you want a helpful overview of dispensationalism, historical premillenialism, postmillenialism, and amillenialism, then these charts (prepared by Mark Vander Pol) should be helpful.