I was born in Providence RI and grew up in the suburbs outside the city. Providence is a wonderful state, quirky, beautiful, and small. It is populated by Italians, Portuguese, and Irish, most of whom are Catholic. (demographic: 64%). Wikipedia further explains, “Rhode Island has one of the highest percentage of Roman Catholics in the nation mainly due to large Irish, Italian, and French Canadian immigration in the past; recently, significant Portuguese and various Hispanic communities have also been established in the state. … Additionally, Rhode Island and Utah are the only two states in which a majority of the population are members of a single religious body.”

I still occasionally read the Providence Journal, nowadays more often to see who died. I guess that is part of the human life cycle as you get older, interest in obits. One of the headlines on Saturday was the following:

Faithful see image of Virgin Mary on cross atop North Providence church
NORTH PROVIDENCE — A steady stream of people gathered Friday in the rain at the Church of the Presentation of the Blessed Virgin Mary to witness what some believe is an image of the Virgin Mary holding baby Jesus. “It’s her. It’s amazing,” said Zumma Canedo, of North Providence.

Canedo, a native of Bolivia, said she had prayed the rosary while standing in the rain outside the church on Mineral Spring Avenue. “She’s saying something,” Canedo said. A darker profile, interpreted by believers as that of the Virgin Mary, can be seen against the gray copper cross atop the church. Bystanders remarked that the profile did not fade despite the pouring rain.

Traffic backed up on the busy road, disrupting a funeral procession that was leaving the church at 11:30 a.m. Carolyn Andreozzi, also of North Providence, said she was having her nails done around the corner when she heard of the sighting on the church steeple and decided to walk over. Asked if she believed it was Mary as she headed to the church, Andreozzi said: “We need a miracle the way this country is going, the turmoil that we are in. Absolutely, I believe.”

“On her return, through the Walgreens parking lot a block up across the street, Andreozzi said: “I would have liked a more definite (sign), but I believe she is there.” Shortly after noon, a crowd lined up by a Channel 12 cameraman, waiting to look through the camera after he finished his report.” 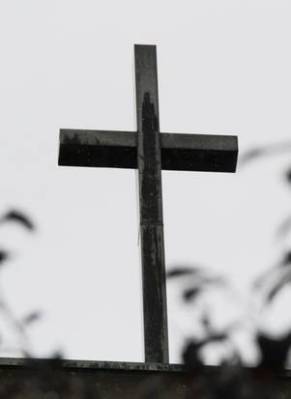 “Brian Dowling, associate director at The Steel Yard, a nonprofit community arts program in Providence, said the discoloration is probably a chemical reaction.” “Like patina,” Dowling said referring to the tarnish that forms on copper from oxidation and other chemical reactions. Copper, Dowling said, yields a wide spectrum of colors, from greens to browns to reds. Parish officials had no immediate comment.”

There are so many things to comment on…and I’m so sad over the whole thing. First, the comment from the lady who said, “We need a miracle the way this country is going, the turmoil that we are in. Absolutely, I believe.” Catholics who adhere to the false doctrines of the Catholic Church are not saved. They are believing the doctrines of demons, not the Gospel as delivered by Jesus Christ. For those who are not saved, they yearn for something to believe in, and they long to fill the spiritual ache in their hearts. Yet they believe in idols. (Isaiah 40:19). They want to and need to believe, but their faith is misplaced.

Then this same lady who had moments before stated, “absolutely, I believe,” then said, “I would have liked a more definite (sign)”…

Let Us Reason Ministries says, “Scripture and history prove that signs and wonders do not instill faith, just the opposite, lack of faith prompts ones desire to see signs and wonders. John 12:37 But although He had done so many signs before them, they did not believe in Him. John 4:48 Then Jesus said to him, “Unless you people see signs and wonders, you will by no means believe.” Jesus was disappointed that it took the miraculous for people to listen to his teachings or follow.” (source)

I’d like to remind everyone that Jesus grew up. “Mary” isn’t holding “baby Jesus”. Jesus is not a baby any more and He hasn’t been for a long, long time. He appeared post-Resurrection in the flesh to many hundreds, and He was fully grown. (And no need to remind everyone that Mary hasn’t been a virgin for a long, long time, either (Matthew 12:46, Luke 8:19, Mark 3:31, Matthew 13:55, Matthew 13:56).

The photo of the long line of people stopping to get a glimpse, walking over to check it out, the seekers of and believers in false signs, is just heart-breakingly painful to see!

And … has anyone thought of what a blasphemous thing it is for “Mary” to be “appearing” on the cross, the place where Jesus was nailed in agony and pain so as to receive the wrath of God for all mankind’s sins?

On the same page as the news story about the alleged Marian Apparition are these headlines:

Here is an anecdote from my life. I am of Italian descent. Attracted to all things Italian, I traveled to Italy several times in the 1990s. One of those times a friend and I rented a car and meandered around Tuscany. We always took the small roads and the out of the way places. One day we were headed to the Tuscan coast and we saw a sign for a small town called “Prata.” Of course we immediately swerved onto that road and explored! I had no idea that town with my surname even existed.

It was siesta time and being a very small village, and raining, we found no people about, except an dapper old man walking up a hill with his cane hooked over his wrist. The church door was open so I peeked in and saw several wizened old ladies wearing black dresses and clomping black shoes, busily polishing the altar and dusting the ceramic statues of Mary they had around. There were a lot of Mary statues.

I bought a postcard from the tiny church gift shop, and here it is:

Apparently the ‘patron saint’ of Prata is “Madonna Del Canale.” Mary of the Canal. Here is the story:

The patron saint of Prata is Our Lady of the Assumption, but the protective figure invoked by the entire population is Our Lady of Graces, known as the ‘Madonna del Canale’ and venerated in the oratory located near the Fonte Vecchia, in the Valley of the Carse, approximately half a mile outside the town.

According to legend, the Madonna appeared to shepherds centuries ago, outside the town walls near a canal where water drained off from an old mine, where Fonte Vecchia is now. To mark this miraculous apparition, a shrine was constructed on the spot, hence the strange name of ‘Canale’ (‘canal’) used by Prata’s residents to invoke their Madonna.

Inside the shrine, a fresco depicting the Virgin Mary was painted, which faded over time. It was therefore decided to reproduce the image on a canvas placed on the high altar of the Church of Prata. The name of the artist who painted the canvas in 1680 is unknown to us. However the painting seems to have disappeared from the church twice and miraculously reappeared near Fonte Vecchia, almost as if the Madonna were indicating her preference for being venerated there instead. So the people of Prata built the Oratory near Fonte Vecchia so that the painting of the Virgin Mary could be kept there forever and promised to take her back every three years, in a solemn procession.

Matthew 24:24 says “For false christs and false prophets will arise and perform great signs and wonders, so as to lead astray, if possible, even the elect.“

‘I want those mandrakes’, Rachel said. So what are mandrakes? - The End Time Blog Podcast

Genesis 30:14-16. Rachel ‘bought’ Jacob by trading him to Leah for a night of passion because she wanted Leah’s son Reuben’s mandrakes that Reuben had found and brought to Leah. “Mandrakes! I want those!,” Rachel said, coveting. She schemed and bargained for them. So what’s so hot about mandrakes? What are mandrakes? Are they valuable? Are they a plant, mineral, or something else? Why did Rachel want them so badly she was willing to give over her precious Jacob to the ‘lesser’ wife for a night in order to obtain them? Tune in to learn a bit of cultural and natural history of this mysterious plant. This episode is also available as a blog post: https://the-end-time.org/2022/01/27/i-want-those-mandrakes-rachel-said-so-what-are-mandrakes/

Mandrakes, what are mandrakes that Rachel wanted so badly?
Waiting at the Gate
Spiritual Slumbering