There have been some interesting archaeological discoveries in the Middle East in the last two weeks. I don’t know what they mean especially, except to ponder the eternal truth that the earth is the Lord’s and everything in it. (Psalm 24:1). He is the Creator of it, the sustainer of it and the One True God who knows every bit of its surface from atop Everest to the bottom of the Marianas trench and below the earth to the center. He knows each layer and each strata. He knows every molecule and which molecule is a part of an igneous rock and which molecule is a Christian burned at the state and ashes spread over His creation. God is not surprised by any of these discoveries. In fact, He knows all about them, when they were built, why, and even that they would be re-discovered this week. It is so comforting to know that our God is so perfect and wise.

Here are the discoveries–

Mysterious Stone Structure Discovered Beneath Sea of Galilee
“A giant “monumental” stone structure discovered beneath the waters of the Sea of Galilee in Israel has archaeologists puzzled as to its purpose and even how long ago it was built. The mysterious structure is cone shaped, made of “unhewn basalt cobbles and boulders,” and weighs an estimated 60,000 tons the researchers said. That makes it heavier than most modern-day warships. Rising nearly 32 feet (10 meters) high, it has a diameter of about 230 feet (70 meters). To put that in perspective, the outer stone circle of Stonehenge has a diameter just half that with its tallest stones not reaching that height. It appears to be a giant cairn, rocks piled on top of each other.”

“Researcher Yitzhak Paz, of the Israel Antiquities Authority and Ben-Gurion University, believes it could date back more than 4,000 years. “The more logical possibility is that it belongs to the third millennium B.C., because there are other megalithic phenomena [from that time] that are found close by,” Paz told LiveScience in an interview, noting that those sites are associated with fortified settlements.”

That would make it just about pre-flood according to the data in Answers in Genesis. Cool.

sophisticated understanding of water preservation. “Numerous ritual baths have been excavated in Jerusalem in recent years, but the water supply system that we exposed in this excavation is unique and unusual,” said Benjamin Storchan, director of the excavation on behalf of the Israel Antiquities Authority. The mikveh includes an underground bath that is entered via steps, and receives rainwater form three separate basins. The basins are located on the roof of the bath, streaming pure water into the mikveh using various channels.”

The bible says: “I will sprinkle clean water on you, and you shall be clean from all your uncleannesses, and from all your idols I will cleanse you.” (Ezekiel 36:25).

According to the Jewish Encyclopedia, a mikveh (ritual pool) is “a pool or bath of clear water, immersion in which renders ritually clean a person who has become ritually unclean through contact with the dead (Num. 19) or any other defiling object, or through an unclean flux from the body (Lev. 15) and especially a menstruant or postpartum woman. It is similarly used for vessels (Num. 31:22–23).”

Jesus came to cleanse us with His very own body. “Jesus answered, “Very truly I tell you, no one can enter the kingdom of God unless they are born of water and the Spirit.”(John 3:5). Anyone in Jesus is now cleansed by His blood and the baptism is an outward show of obedience to Our Lord and Savior.

The ancient city of Ur was discovered only recently, about 90 years ago. It is thought to be Abraham’s birthplace, and certainly the bible describes it as a place where Abraham dwelled. However what makes this discovery so exciting is that it is the first time a building has been unearthed that might be connected with the city and/or have religious connections to the idolatry there.

Archaeologists in Iraq find ancient complex near Ur, home of biblical Abraham
“British archaeologists have unearthed a sprawling complex near the ancient city of Ur in southern Iraq, home of the biblical Abraham. The structure, thought to be 4,000 years old, probably served as an administrative centre for Ur, around the time Abraham would have lived there before leaving for Canaan, according to the Bible. … “This is a breathtaking find,” Campbell said, because of its unusually large size — roughly the size of a soccer pitch, or about 80 metres on each side. The archaeologist said complexes of this size and age were rare.”

Genesis 11:27-28 says, “Now these are the generations of Terah. Terah fathered Abram, Nahor, and Haran; and Haran fathered Lot. Haran died in the presence of his father Terah in the land of his kindred, in Ur of the Chaldeans”

Genesis 12:103 says, “Now the Lord said to Abram, “Go from your country and your kindred and your father’s house to the land that I will show you. And I will make of you a great nation, and I will bless you and make your name great, so that you will be a blessing. I will bless those who bless you, and him who dishonors you I will curse, and in you all the families of the earth shall be blessed.”

The article says they found the complex near a partially reconstructed ziggurat of the Sumerians. “By 2000 BC Sumerians living in cities such as Ur and Uruk in southern Iraq had developed paved roads, the arch and vault, writing, schools, epic literature, law codes, banking, and even joint-stock corporations. All this occurred two thousand years before Cleopatra or Julius Caesar. … The Ziggurat at Ur, a massive stepped pyramid about 210 by 150 feet in size, is the most well-preserved monument from the remote age of the Sumerians. The ziggurat was part of a temple complex that served as an administrative center for the city… Construction of the ziggurat was completed in the 21st century BC by King Shulgi, during whose 48-year reign the city of Ur grew to be the capital of an empire controlling much of Mesopotamia. To win the allegiance of the many formerly independent cities he controlled, Shulgi proclaimed himself a god and became a great patron of the arts.” (source)

It was in that pagan civilization God called Abram. It was an advanced civilization existing 4000 years ago, but one that for all its advances, was nothing and would come to nothing because they did not know righteousness. He had revealed Himself personally before the flood and mightily during the flood and all descendants knew Him after the flood. However, some went the way of Cain, and departed from the presence of the LORD (Genesis 4:16, Jude 1:11).

Then they built temples to false gods and proclaimed themselves gods- as this website explains and is excerpted below.

“Construction of the ziggurat was completed in the 21st century BC by King Shulgi, during whose 48-year reign the city of Ur grew to be the capital of an empire controlling much of Mesopotamia. To win the allegiance of the many formerly independent cities he controlled, Shulgi proclaimed himself a god and became a great patron of the arts.” Photo- The Sumerian Ziggurat at Ur During Excavations. (source)

Abram lived in all that mess. I often wonder, why Abram? Why did Abram believe? Why did he leave, not knowing where he was going, (Hebrews 11:8) with such faith? Abram’s own father Terah worshiped idols! All of Babylon had been under the influence of the first dictator, Nimrod, and his towers to false idols and astrology and idol worship remained to Abram’s day. The pollution of unrighteousness had even grown tremendously. So why did Abram believe? I can only say that God is God and when he makes Himself known you cannot help but know His voice is the voice of the one and only God when you hear it. Abram/Abraham believed God!

“Abram believed the LORD, and he credited it to him as righteousness. (Genesis 15:6)

I just think that is all so amazing! 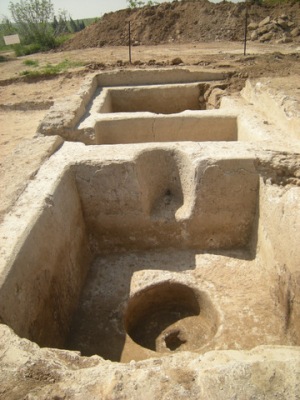 Well-Preserved Wine-Making Facility Found in Southern Israel
“Antiquities Authority workers have discovered a well-preserved Byzantine era wine-making facility in southern Israel. The discovery, made during a construction project for a wedding hall, is one of the best preserved examples of an ancient wine-making facility from that era found so far in Israel. The wine-making facility includes a 100 meter tiled floor for crushing grapes, as well as a winepress. Below the wine-making floor are three large holes, where freshly produced grape juice would flow. The holes were well protected from dirt and pests, and there are several vats for the fermentation of the wine around the facility.”

“The owner of the facility was apparently Christian, archaeologists said, as the model of an as yet

unidentified Byzantine-era church was found at the site. The model is intricately made, with precisely carved crucifixes, decorations, and handles for the doors and windows. In addition to the wine-making facility, an almost perfectly preserved clay model of a church was also discovered. The find was discovered near Hamei Yoav, east of Ashkelon. Right, A ceramic lantern shaped like a miniature church, unearthed at Hamei Yoav in southern Israel (photo credit: Courtesy of the Israel Antiquities Authority) source”

The facility would have been in use 1500 years ago.

I think it is exciting to see the well-preserved remnants of the daily life of our forefathers in the land of Jesus!

“And the winepress was trodden outside the city, and blood flowed from the winepress, as high as a horse’s bridle, for 1,600 stadia. (Revelation 14:20)

“Coming out of his mouth is a sharp sword with which to strike down the nations. “He will rule them with an iron scepter.” He treads the winepress of the fury of the wrath of God Almighty.” (Revelation 19:15)

Notes & Links “What Does it Mean to be Successful?“ The Master's University "What is 'the Way?' GotQuestions Westminster Shorter Catechism This episode is also available as a blog post: https://the-end-time.org/2021/12/08/im-not-successful/

I'm Not Successful
@JenCarfagno @weatherchannel says "It gets dark so early! This week has the earliest sunsets of the year for most locations."
Advent, Thirty Days of Jesus: Day 12, The Son!
Faith's Check Book, Daily Entry, C. H. Spurgeon
Advent: Thirty Days of Jesus, Day 11. He was Obedient.