We read in the “Pastoral Epistles”, Titus and Timothy, what to do that is consistent with sound doctrine. The pastoral epistles are: “those letters written by Paul to Timothy and Titus in the New Testament. So, they are 1 and 2 Timothy and Titus. They are called pastoral because they are letters with instructions for pastors, congregations, and general functions within the church.”

We read what people are supposed to do in order to display the highest qualifications for behavior and character.

But as for you, teach what accords with sound doctrine. Older men are to be sober-minded, dignified, self-controlled, sound in faith, in love, and in steadfastness. Older women likewise are to be reverent in behavior, not slanderers or slaves to much wine. They are to teach what is good, and so train the young women to love their husbands and children, to be self-controlled, pure, working at home, kind, and submissive to their own husbands, that the word of God may not be reviled. Likewise, urge the younger men to be self-controlled. Show yourself in all respects to be a model of good works, and in your teaching show integrity, dignity, and sound speech that cannot be condemned, so that an opponent may be put to shame, having nothing evil to say about us. Slaves are to be submissive to their own masters in everything; they are to be well-pleasing, not argumentative, not pilfering, but showing all good faith, so that in everything they may adorn the doctrine of God our Savior.

Paul is telling Titus to teach according to sound doctrine. Paul does not particularly outline what the sound doctrine is, at this point because the point of the letter is to encourage Titus to display and hence his flock to display certain behavioral attributes. In displaying these attributes in life, they will be acting consistently with sound doctrine.

In an interesting parallel, Paul gives Timothy a list of behavioral attributes, too. The difference is, Paul’s list to Timothy includes behaviors that are contrary to sound doctrine. Here is the list:

Now we know that the law is good, if one uses it lawfully, understanding this, that the law is not laid down for the just but for the lawless and disobedient, for the ungodly and sinners, for the unholy and profane, for those who strike their fathers and mothers, for murderers, the sexually immoral, men who practice homosexuality, enslavers, liars, perjurers, and whatever else is contrary to sound doctrine, in accordance with the gospel of the glory of the blessed God with which I have been entrusted. (1 Timothy 1:8-11)

Anyone displaying these negative attributes in their behavior are acting against sound doctrine.

The second thing to focus on is the reason we are to behave consistent with the good doctrine we have been taught. It is so that the name of Jesus will not come under reproach. If we behave against sound doctrine, the adversary (satan, that old dragon) will be able to use us to bring reproach upon Jesus’ name.

In the unbelieving world, it is very easy to avoid Christians. Their mind is darkened, so they do not see us.

“Now this I say and testify in the Lord, that you must no longer walk as the Gentiles do, in the futility of their minds. They are darkened in their understanding, alienated from the life of God because of the ignorance that is in them, due to their hardness of heart.” (Ephesians 4:17-18)

Two kingdoms are co-existing side by side, locked in a war. The opponents are- satan’s army and his unbelievers whom he influences, and Jesus’s army and His saved believers. The unbelievers do not really see us but they are aware of our presence. What I mean is, unbelievers as a whole do not think about Christians in their daily lives. It is very easy to have no contact with Christians, be unaware and uncaring about Christian life, and go for long periods of time not hearing or seeing Christian language or behavior. It is like oil and water. As we know, oil and water may occupy the same space in a glass, but they do not mix.

Never let anyone tell you that ‘doctrine doesn’t matter.’ It does. It is not just head knowledge but it expresses itself through behavior that brings the Kingdom forward and lets the blind to see the unreproached name of Jesus.

Paul ended that paragraph by saying that we may adorn the doctrine of Christ the Savior. The word adorn id defined – “properly, to beautify; to adorn, make compellingly attractive, very appealing (inviting, awesomely gorgeous).

We are not gorgeous but Jesus in us is gorgeous! Let us pray for the strength and wisdom to go forward each day so that we may adorn Him, and be compellingly attractive in the eyes of those who are living in such darkness. We have been told how to act, and how not to act. 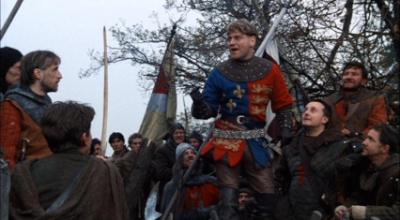 In 1415, Henry V was severely outnumbered as they prepared for battle at Agincourt. This battle was dramatised by William Shakespeare in the play Henry V featuring the St. Crispin’s Day Speech in which Henry inspired his much outnumbered English forces to fight the French. It was a stirring moment in the film adaptation when actor Kenneth Branagh gave the speech. It was the speech when the King said, once more into the breach, dear friends. I was inspired to jump up and fight against the opposing forces! It was unusual for a king to call his army men ‘friends.’

Our King has given us a stirring speech, too. It is the bible. His doctrine is the inspiration for us to leap up and go into battle. But our battle is not in flesh and blood nor with swords. Our battle is through our behavior and our words, and the love we carry for our King, a remarkable eternal king who calls US His friends. Would you fight for Him in kindness and gentleness so that we may adorn Him?