Here is a prophecy to look forward to!

Believers, if you have been faithful and your persevering walk is evidence of that faith, you will be given a pass into eternal glory upon which the Lord of Hosts, the Ancient of Days, the Holy-Holy-Holy Lord has written upon it Himself, personally for just YOU!

“He who has an ear, let him hear what the Spirit says to the churches. To the one who conquers I will give some of the hidden manna, and I will give him a white stone, with a new name written on the stone that no one knows except the one who receives it.’’ (Revelation 2:17)

“But there’s an interesting little historical note, when a victor won in the games, whatever great games were being held, it was not uncommon for the victor to be given as part of his prize a white stone. And the white stone was his admission pass into the festival that was held following the games for all the victors. Could it be that the overcomer will receive the ticket to the eternal victory in heaven?”

Commentary on that verse:
“And then He says, “And a new name written on the stone,” and I read where they would do that. They would give the victor, like a trophy, a stone with his name and he alone could use it as his pass. “A new name written on the stone which no one knows, but he who receives it.” I can’t tell you how many people have asked me…what is that name? A lady will come to me any time I preach on the book of Revelation and say, “What is the name that no man knows?” Folks, I don’t know what the name is. If I knew what the name was then this verse couldn’t say what it says, it would have to say, “And no one knows except John MacArthur.” The only one who knows what it says is the person who receives it, that’s how personal it is. What it is to me is some kind of personal message from Christ to the one He loves which is given as an admission pass into eternal glory. I’ll know mine and you’ll know yours and we’ll know the Lord wrote them for each of us and for none of the others of us.” (source)

WOOP! It is huge to think of the precious Savior not only saving me, not only guiding and protecting me, not only providing for me, but when He brings me to glory (amazing!) He gives me a personal message just for me, out of the millions thronging there! 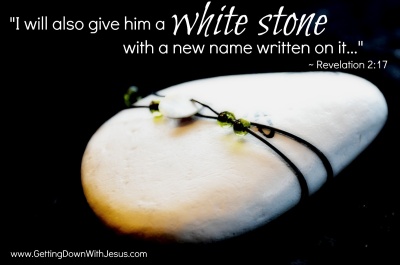