This is Cimmarron National Grassland, Kansas. Not much grass. The Grassland director explains that it is already drier than the driest of the Dust Bowl years.

Video here, explaining what is going on. The Cimmaron Grassland Director there is saying that there has been only 2.99 inches of moisture in the last 10 months, when the normal amount is 19 inches. The topsoil has blown away, and the grasses that remain have exposed roots. When the tender roots are exposed to constant blasting of wind and sand, they die. Compounding the issue has been fire. On Mother’s day there was a fire in the Grasslands that incinerated 15,000 acres, and could not be controlled due to 50 mph winds.

This report says that the Dust Bowl may be returning.

“Desperation is the only thing growing“
Since last September — 10 months ago — Morton County near Elkhart has received 2.99 inches of moisture. The normal average rainfall for that corner of Kansas is about 19 inches. There was no dryland wheat harvested in the county this year; more than three-quarters of the county’s acres are dryland. Farmers are selling cow-calf operations in record numbers because there is not enough feed. Newborn calves, less than a day old, are on the auction block.
Roads have been closed due to drifting sand, blocking access to gas and oil wells and causing some companies to shut the wells down temporarily. “I’d describe this drought as very bleak,” said Morton County agricultural extension agent Tim Jones. “You can’t do anything. It is hot, dry and windy. We are at a complete standstill.”

“Last week, the U.S. Department of Agriculture issued a drought disaster declaration for 49 Kansas counties, nearly half the state.”

Blogger BayouRenaissanceMan has these two photos of the Kansas grasslands showing before and after: 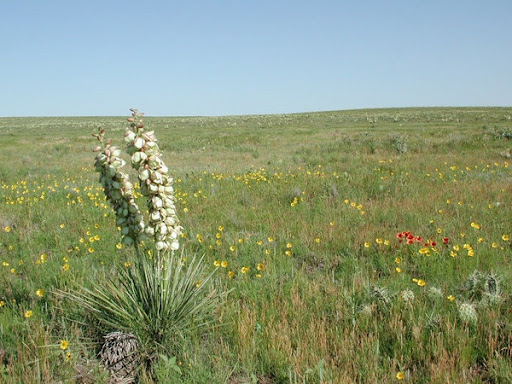 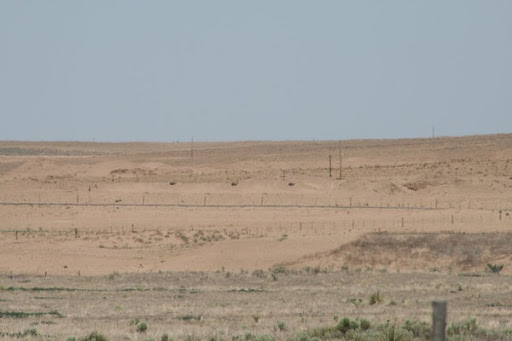 He ended his blog entry with a plea for those who are so inclined, to pray for rain. I second that.

We reel from one disaster to another, the flooding in the nation’s midsection was and still is monstrous, while just a few hundred miles to the west there is no water. Heat sears the east, while the west shivers in record cold. Crops are dying in many drought-ridden states and the deepening of the tragedy is now having impacts on next year’s cycle. The Dust Bowl cycle is also returning. Naysayers claim that there has always been a cycle of drought and lushness, and that is true, but the Dust Bowl was man made due to mismanagement of the land, and after a certain tipping point there was no recovery. The issue today may or may not be man’s mismanagement but surely the things the Lord has said will come to pass. Those things include famine and drought. During the Tribulation, the Two Witnesses sent by God will prophesy for three and a half years and will be given power:

“These have power to shut heaven, so that no rain falls in the days of their prophecy; and they have power over waters to turn them to blood, and to strike the earth with all plagues, as often as they desire.” (Rev 11:6). So the naysayers who claim this is just part of a cycle and that we will return to normal soon are wrong. It will only get worse.

Worse, that is, for unbelievers who choose to deny Jesus and thus ultimately choose to remain on earth when the worst of the worst will hit. This is nothing now. During the Tribulation people will be longing for these days when at least sometimes it rained. Believers will be raptured from the earth to be with the Living Water, who is Jesus. We will be refreshed with life everlasting! Why will we receive these blessings? Because Jesus willingly came to earth to die in propitiation for our sins. He accepted the wrath of God as judgment for sinful man, replacing us whose punishment is deserved, with Himself, who deserved none. Since your sins have been punished already all you need to do is accept that His work on the cross was your punishment for your sins, and ask Him to forgive them. The punishment has been rendered but so has the forgiveness! You have to claim it though.

I bet if someone gave you a lottery ticket you’d put it in your wallet. You may forget about it. But perhaps your friend comes up to you to share the good news, saying, ‘Hey, I was watching the TV and the lottery number they gave was the one on your ticket! You won!” I am sure you would take the ticket out out, check it, and hurry right down to the lottery office to claim your reward. You might even get a speeding ticket, you rush so fast to get that money! But instead, in rejecting Jesus, it is like you say, ‘oh, yeah, I won a billion dollars’ and you go, ‘maybe I’ll claim it later. Or not. Ho hum.’ Yet the treasure that He offers, the treasure that He IS, is so much more than a billion dollars. Money rots away, it decreases in value, but the treasure of everlasting life with Jesus never rots away. It is priceless because it is infinite. Why don’t people claim THAT Good News?

Stay parched and thirsty if you want, but I sipped the living water and not only am I refreshed right now, in these dark days, but I am looking forward to everlasting refreshment with Him, in New Jerusalem! You can as well.

Pray for our brothers and sisters in the drought states, they are suffering. Thankfully, that suffering will end when the rapture comes. But for those who remain behind, it will be a very thirsty time indeed.

““Behold, the days come, says the Lord God, that I will send a famine in the land, not a famine of bread, nor a thirst for water, but of hearing the words of the Lord: And they shall wander from sea to sea, and from the north even to the east, they shall run to and fro to seek the word of the Lord, and shall not find it. In that day shall the fair virgins and young men faint for thirst…” (Amos 8:11-13 KJV).”
Tweethttp://platform.twitter.com/widgets.jshttp://www.facebook.com/widgets/like.php?href=http://the-end-time.blogspot.com/2011/07/us-drought-desperation-only-thing.html