The end time is a time when regard for human life is at an almost all-time low. The lowest point will be the Tribulation, but Paul explained that these end times would be perilous times, too, including overriding greed. The greed would be so pervasive that employers would cheat their workers and withhold pay. Millionaires would pile up treasure for themselves while millions can’t afford bread. Jesus warned in several parables about clinging to riches of this earth at the expense of the poor. In 2 Tim 3:2, Paul exclaims about perilous times and one of the perils is loving money:

But realize this, that in the last days difficult times will come. For men will be lovers of self, lovers of money. Tim 3:1-2a)

Here is more than one verse about those who succumb to the perils of loving money:

Now the Pharisees, who were lovers of money, were listening to all these things and were scoffing at Him … (Luke 16:14)
not addicted to wine or pugnacious, but gentle, peaceable, free from the love of money. (1 Tim 3:3)
For the love of money is a root of all sorts of evil, and some by longing for it have wandered away from the faith and pierced themselves with many griefs. (1 Tim 6:10)

Having money is not a problem. Money itself is not a problem. Loving money is a problem. A man cannot have two masters. With that in mind, I notice the issue of the BP oil spill and the wrestling match over Pensacola Beach. On June 23, the Escambia County Florida Sheriff’s Department flew over Pensacola Beaches and the scope of the spill washing up on popular tourist-shores hit home. Here is but one screen shot, the video is at the link above:

On June 25, a quarter mile of Pensacola Beach was closed, marking the first time a beach was officially closed due to oil washing up.

On June 28, videographer Diana Stephens noted that though the water may look fine, it is not. Placing a porous fish filter in the rushing surf, it came away clogged with oil. She said that the filter is porous, like our skin, indicating that such oil toxins will penetrate our own metabolic system in short order if submerging any part of our bodies for even a short time. Children are especially at risk.

That these beaches are open is unconscionable. But the tourism industry is taking a hammering and apparently the beach official, schooled in science, health, and marine sciences, (not) was persuasive. They want the money. Tourism contributes 57 billion to Florida’s economy. That’s billion with a B.

From Knoxville News: “While the media have been heavily focused on the serious water pollution issue, not much coverage has been given to the air pollution issue. Journalists visiting the site have reported headaches and nausea from their trips covering the site. While many workers cleaning up the beach have gear to protect them from skin contact with the tar balls, I have yet to see any of them wearing respirators, and when reports of many sickened workers surfaced, BP’s response was that they were suffering from a bout of food poisoning.”

These children play on an oil soaked beach in Destin, FL. 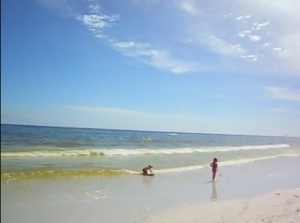 They playfully run back and forth from the water to their mother:

Through this toxic oil minefield:

When the children realized how much oil they have on their skin, this little girl starts to cry and scream. “MOMMY, GET IT OFF! I DON’T WANT IT! I DON’T WANT THE OIL!!” The 4-min video is here. 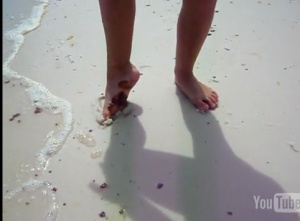 Jesus thinks highly of children, and issues special warning about their ill-treatment. I wish that the first priority of the officials was the protection of our society’s most vulnerable. But it isn’t. It’s money. They store up money…at the expense of the lives and the health of their brothers and sisters on this earth. Perilous times indeed.