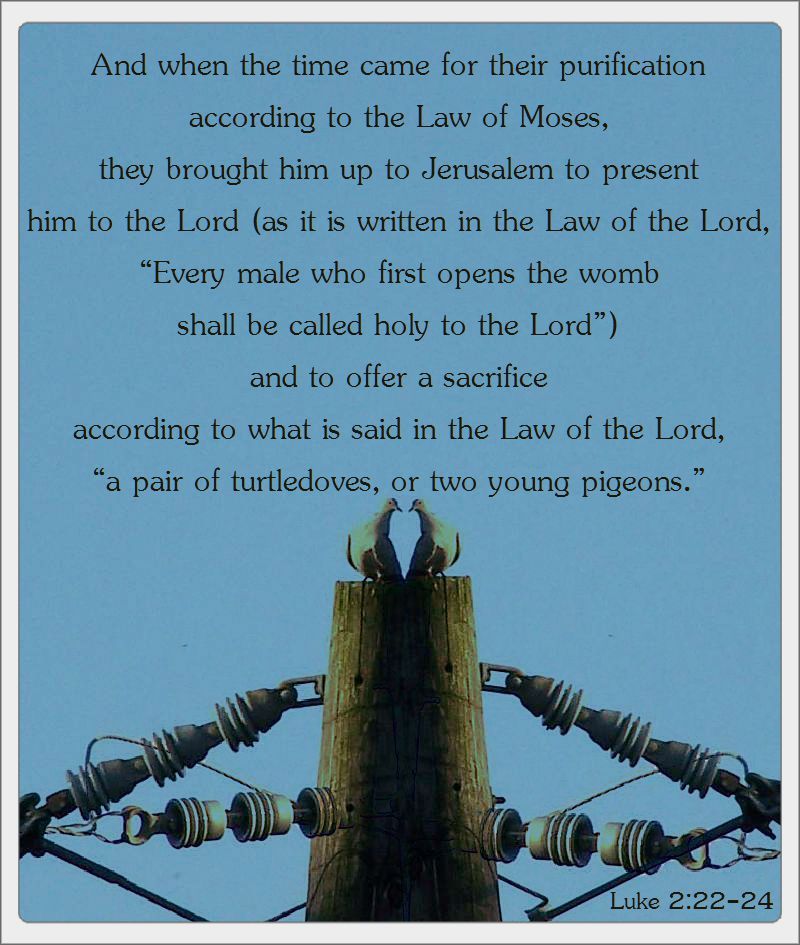 Previous essays in the series:

1. Zacharias: There is no such thing as chance, even when casting lots
2. Anna: The Lord’s Precious Widow

Joseph and Mary were obedient. They were worshipers of their Holy God. Mary’s humility and obedience was shown when responding to Gabriel on the startling news that she, a virgin, would bear a child, and the Messiah at that. (Luke 1:38 and Luke 2:22-24). Joseph was obedient in that he followed the Lord’s wishes sent through an angel and did not divorce Mary quietly as he’d planned (Matthew 1:19-21).

So at the required time, Mary and Joseph brought the infant Jesus to the Temple and prepared to make their sacrifice to God. The verse says they were to sacrifice a pair of turtledoves, or two young pigeons.

What were these sacrifices? What was their meaning? Even though these verses are contained in the New Testament, the ‘times’ were still Old Testament. John the Baptist is considered the last OT prophet. Prior to Jesus’ death and resurrection, Israelites were still under Old Testament Law. Sacrifices were ongoing. We saw the bustle of the Temple during the Passover when Jesus went there, His anger at the money changers, the swirl of animals and merchandising in the courts that He drove out with a whip.

What were these sacrifices all about?

Thus the Old Testament sacrifices were not only symbols, nor yet merely predictions by fact (as prophecy is a prediction by word), but they already conveyed to the believing Israelite the blessing that was to flow from the future reality to which they pointed.

… The fundamental idea of sacrifice in the Old Testament is that of substitution, which again seems to imply everything else—atonement and redemption, vicarious punishment and forgiveness. Alfred Edersheim, The Temple

The sacrifices are called the Korban. There are eleven different sacrifices, sorted into public and private. The public sacrifices included those that all Israelites were to perform. These were mandatory.

Private sacrifices would be unique to individual people at various times of their lives. Rabbis classify them as those on account of sins by word or deed. These were voluntary.

We can divide all the sacrifices into bloody and non-bloody. We saw that distinction first in Genesis 4, where Abel brought a first-born animal from his flock and Cain brought a plant-based item (“fruit of the ground”). In that instance, the fruit of the ground was not acceptable. (Genesis 4:5).

The sacrifices were all chosen by God and ordered to be brought in a certain way through the proper mediatorial person. Sacrifices were serious. Strange fire was not allowed. Nadab and Abihu found out the hard way. (Leviticus 10:1-2). Saul was punished for offering a sacrifice because he was not the proper mediatorial person, he was neither a priest or a Levite. (1 Samuel 13:13). So whether the sacrifice was bloody or non-bloody, mandatory or voluntary, holy or most holy, it had to be the right type for the right kind of sacrifice offered in the right way through the right person.

In Scripture three kinds of four-footed beasts—oxen, sheep, and goats; and two of birds—turtle-doves and young pigeons—are appointed for sacrifices. The latter, except in certain purifications, are only allowed as substitutes for other sacrifices in case of poverty.

In case of poverty. This brings us back to the young couple Mary and Joseph, mystified by recent events, emotionally rocked, and spiritually shocked. There they were, Mary and Joseph, carrying the baby who had been born in a manger. The verse in Luke 2:22 begins ‘and when the time came for their purification according to the Law of Moses… who or what needed purifying? Mary did.

her purification—Though the most and best copies read “their,” it was the mother only who needed purifying from the legal uncleanness of childbearing. “The days” of this purification for a male child were forty in all (Le 12:2, 4), on the expiry of which the mother was required to offer a lamb for a burnt offering, and a turtle dove or a young pigeon for a sin offering.

If she could not afford a lamb, the mother had to bring another turtle dove or young pigeon; and, if even this was beyond her means, then a portion of fine flour, but without the usual fragrant accompaniments of oil and frankincense, as it represented a sin offering (Le 12:6-8; 5:7-11). From the intermediate offering of “a pair of turtle doves or two young pigeons,” we gather that Joseph and the Virgin were in poor circumstances (2Co 8:9), though not in abject poverty.

Being a first-born male, they “bring him to Jerusalem, to present him to the Lord.” All such had been claimed as “holy to the Lord,” or set apart to sacred uses, in memory of the deliverance of the first-born of Israel from destruction in Egypt, through the sprinkling of blood (Ex 13:2).

It was in obedience to this “law of Moses,” that the Virgin presented her babe unto the Lord. Jamieson Fausset Brown Commentary

In researching the various sacrifices, when, why, wherefore, it got confusing. There were a lot of sacrifices. I didn’t even mention the drink offering, the wave offering, the jealousy offering, the Nazirite offering, the purification rituals… It felt burdensome. Keeping track of all the various sacrifices and tiers and days and morning and evening, phew, how it must have felt for the Jews at the time?! Nevertheless, impoverished Mary and Joseph were diligent and righteous, and they knew when the forty days were up, and made the ascent to Jerusalem to present the Babe. It is mentioned thrice in rapid succession that Mary and Joseph came to do according to the Law, in verse 20 and again in verse 27 and again in verse 39.

Then as later, (Luke 2:40) the LORD must have looked down from His height upon His Son and must have been pleased. As Simeon sang by the Spirit,

Lord, now you are letting your servant depart in peace,
according to your word;
for my eyes have seen your salvation
that you have prepared in the presence of all peoples,
a light for revelation to the Gentiles,
and for glory to your people Israel.
Luke 2:29-32

The Jealousy Ritual: Cup of the Adulteress (Numbers 5:15)

Looking at three of each of the attributes of God these Sundays. Today we look at Peace, Perfection, and Righteousness. 1. Attributes of God: Aseity, Beauty, Blessedness 2. Eternity, Freedom, Glory 3. Goodness, Holiness, Immutability 4. Invisibility, Jealousy, Knowledge 5. Love 6. Mercy, Omnipotence, Omnipresence This episode is also available as a blog post: https://the-end-time.org/2022/09/25/the-attributes-of-god-peace-righteousness-perfection/

Link in bio
EPrata photo
pretty sky earlier this morning
Home! It's the #weekend. Kicking back with some carbonated water, veggie straws, and the bonus episode of the MacArthur Center Podcast: MacArthur and the Puritans. Happy Weekend everyone!
BY ELIZABETH PRATA
Follow The End Time on WordPress.com